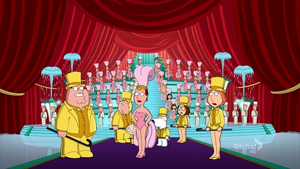 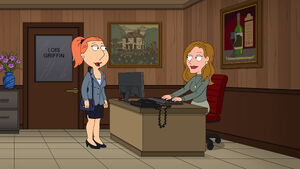 Judy Greer (born Judith Therese Evans; July 20, 1975)[1] is an American actress, known for portraying a string of female characters, including Kitty Sanchez on the Fox series Arrested Development and Cheryl on the animated comedy series Archer. Greer has had a supporting role in a number of romantic comedy films, including The Wedding Planner, 13 Going on 30, and 27 Dresses.

Greer provides assorted voices including the pregnant showgirl who interrupts the theme song in "Lottery Fever" and Hope in "Livin' on a Prayer".

Judy appears as herself as Lois' secretary at the Pretty House on the Label Winery in "Disney's The Reboot".

Retrieved from "https://familyguy.fandom.com/wiki/Judy_Greer?oldid=215751"
Community content is available under CC-BY-SA unless otherwise noted.