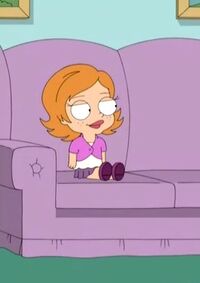 Julie is the second female lead in the American version of Jolly Farm Revue in "Go, Stewie, Go!". Stewie Griffin, disguised as a girl named Karina Smirnoff to get on the show. He falls in love with Julie and finds she is already in an abusive relationship with Randall, a bossy male co-star. Later, Julie stops by the Griffins' house while Stewie is out of costume and frantically stages a running commentary with himself and Karina to keep the disguise legitimate. Julie asks to read her lines with him since she broke up with Randall and invites Karina into coming to her house for a sleepover. Julie asks to say goodbye to Stewie and Stewie rushes off arguing with himself again, prompting Julie to slip out.

The sleepover goes well despite Stewie finding himself sharing a bed with Julie and she wishes there could only be girlfriends instead of boyfriends. They cuddle and Stewie gives her a goodnight kiss as she falls asleep. The next day on the set, Stewie is confused by his relationship with Julie. When she tells him they are doing a live performance and asks to be comforted, Stewie takes it too far and tries to kiss Julie while she is awake and she responds that she isn't interested in being in a lesbian relationship. Julie breaks off by wishing Karina was a boy. Stewie decides to reveal his true identity. Stewie leaves the show but tells Brian that Julie's mother wouldn't let him say goodbye and reports she is back with Randall.

She is voiced by Mae Whitman.

Retrieved from "https://familyguy.fandom.com/wiki/Julie?oldid=116651"
Community content is available under CC-BY-SA unless otherwise noted.