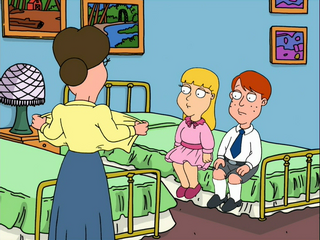 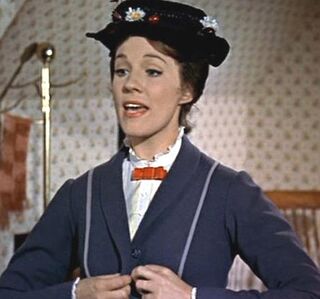 Julie Andrews (née Wells; born 1 October 1935) is a British film and stage actress, singer, and author. She is the recipient of Golden Globe, Emmy, Grammy, BAFTA, People's Choice Award, Theatre World Award, Screen Actors Guild and Academy Award honours. Andrews was a former British child actress and singer who made her Broadway debut in 1954 with The Boy Friend, and rose to prominence starring in other musicals such as My Fair Lady and Camelot, and in musical films such as Mary Poppins (1964) and The Sound of Music (1965).

She starred in The Sound of Music as Maria Von Trapp. Stewie runs Maria over during her "The Hills Are Alive" performance in the introduction sequence of "PTV".

Stewie sings “I Have Confidence” in "Stewie B. Goode", part one of Stewie Griffin: The Untold Story dressed as Von Trapp.

In "Lethal Weapons", Lois Griffin declares she is cutting loose just like Andrews when she shows her breasts in Mary Poppins. Poppins is then shown opening her blouse in front of Michael and Jane Banks.

In "And I'm Joyce Kinney", Quahog 5 News reports she pleads not guilty for gun possession, claiming she brought the gun to a nightclub for protection.

Retrieved from "https://familyguy.fandom.com/wiki/Julie_Andrews?oldid=123983"
Community content is available under CC-BY-SA unless otherwise noted.