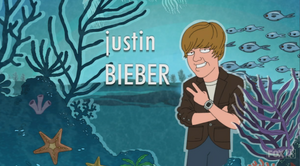 Justin Drew Bieber (born March 1, 1994) is a Canadian pop/R&B singer, songwriter and actor. Bieber's debut single, "One Time", was released in 2009 and peaked in the top ten in Canada and charted in the top thirty in several international markets. His debut album, My World, followed in November 2009, and was later certified platinum in the United States. He became the first artist to have seven songs from a debut album chart on the Billboard Hot 100.

Bieber was mentioned in a contest held by Weenie and the Butt in "Stewie Goes for a Drive".

Justin Bieber is one of the guests at the Teen Choice Awards the Griffin family attends on the night of Meg's 18th birthday in "Quagmire and Meg".

When Seth MacFarlane appeared on Conan in December 2011, Conan O'Brien showed Seth a photo of Bieber wearing a necklace with a blinged-out Stewie.[1]

In "Lois Comes Out of Her Shell", Lois sneaks backstage at a Justin Bieber concert intending to seduce him. After he is beaten up by Peter, Peter has to go out for an encore where he presents "Conway Bieber".

Bieber is mentioned in "Total Recall" during a cutaway, where a man attempts to present a singer to P. Diddy, describing him as the next Justin Bieber.

An elderly Stewie looks down on teenagers in the future and reminisces about "good" singers like Justin Bieber in "Secondhand Spoke".

When explaining to Jerome why he should "Thank the Whites" in "Baby Got Black", Peter uses Justin Bieber as an example, although he notes that he and Eminem try to dress and talk like blacks.

Justin is listed as a celebrity that went on to be successful despite exposing themselves in "An App a Day".

Retrieved from "https://familyguy.fandom.com/wiki/Justin_Bieber?oldid=185087"
Community content is available under CC-BY-SA unless otherwise noted.