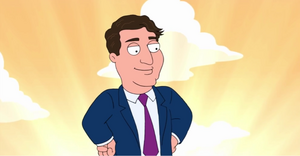 Justin Pierre James Trudeau PC MP (born December 25, 1971) is a Canadian politician serving as the 23rd prime minister of Canada since 2015 and leader of the Liberal Party since 2013.

When Donald Trump and Peter Griffin crash into the Washington Monument in a pair of planes taken from the National Air & Space Museum in "Trump Guy", Donald tries to extend his hand to Peter, but it causes both of them to lose their grip and fall, landing on a stunt cushion emblazoned with the maple leaf where Canadian Prime Minister Justin Trudeau had managed to save the pair. As Trudeau asks if they are ok, they argue over who punched the other more. Satisfied that they are alright, Trudeau departs on a pair of Canadian geese.

Retrieved from "https://familyguy.fandom.com/wiki/Justin_Trudeau?oldid=209726"
Community content is available under CC-BY-SA unless otherwise noted.