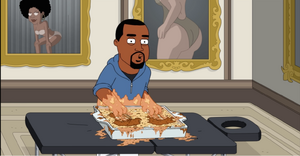 In "Friends of Peter G", poet William Wordsworth struggles to come up with lyrics to Kanye West's song "Gold Digger".

Kanye is included in Chris' list of celebrities who have led successful lives despite exposing themselves in "An App a Day".

The Kanye Canes in "Don't Be a Dickens At Christmas" are a parody of Kanye West.

In "Married...With Cancer", Quagmire sets aside his feud with Brian and promises to throw him a bachelor party crazier than anything Kanye West is up to. Kanye is shown massaging a lasagna and prepares to announce his intent to join ISIS.

Retrieved from "https://familyguy.fandom.com/wiki/Kanye_West?oldid=218789"
Community content is available under CC-BY-SA unless otherwise noted.