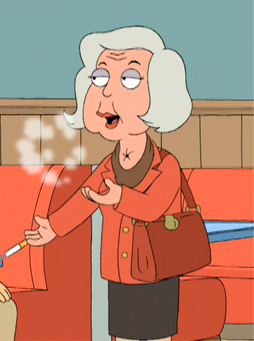 Karin Parotta is a modeling agent who helped Lois Griffin jumpstart her modeling career in "Model Misbehavior". She calls Lois "sugar". As the success of Lois' career grew, Karin pressured her to take diet pills. She is a heavy smoker and, as a result, has a large stoma in her neck, which she still smokes through. This stoma was a turn-on to Glenn Quagmire, who asks if she uses it for sex. Karin can also dispense Pez candy from it.

The character is named after Karin Perrotta, Post production supervisor on Family Guy.

Retrieved from "https://familyguy.fandom.com/wiki/Karin_Parotta?oldid=134485"
Community content is available under CC-BY-SA unless otherwise noted.