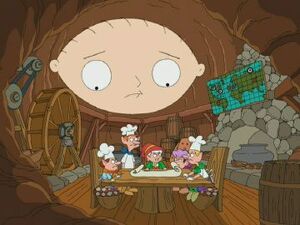 The Keebler Elves, led by Ernie Keebler, are animated spokescharacters for the Keebler cookie company. The elves have appeared in countless television advertisements throughout the years, shown baking their unique products. The Keebler tree logo reflects this characterization.

They appear in "Blind Ambition", where they are planning an attack on Snap, Crackle, and Pop as soon as Judd Hirsch delivers a weapon.

Ernie Keebler is present as a gathering of mascots hosted by Peter in "Pawtucket Pete" when he becomes the new mascot for Pawtucket Patriot Ale.

Peter tries to open a hole in a tree with a chainsaw in order to lower the Keebler Elves to him in "Boys & Squirrels", but ends up with the tree falling in his yard. Cleveland, coming over to check on things, is asked by Donna to also look for the Elves

Retrieved from "https://familyguy.fandom.com/wiki/Keebler_Elves?oldid=227026"
Community content is available under CC-BY-SA unless otherwise noted.