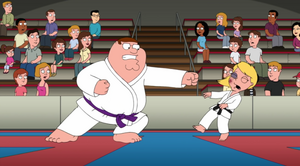 Kelsey is a karate black belt girl that Peter beats in "Undergrounded".

When Peter demands that Brian keep his secret tunnel to escape being grounded by Lois, he threatens him that he won't be a 'good boy' if he tells. Brian agrees to keep the secret noting what Peter did to Kelsey. As Peter knocks out Kelsey with a single punch, he is booed by the audience as he continues to trash talk over her about strutting around Pizza Hut with her trophy. However, when he stops to give her a chance to respond, she remains unresponsive.

Retrieved from "https://familyguy.fandom.com/wiki/Kelsey?oldid=219517"
Community content is available under CC-BY-SA unless otherwise noted.