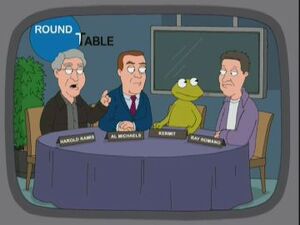 Kermit the Frog is puppeteer Jim Henson's most famous Muppet creation, first introduced in 1955. He is the main protagonist of many Muppet projects, most notably as the host of The Muppet Show, and has appeared in various sketches on Sesame Street, in commercials and in public service announcements over the years.

He appears as a stuffed toy with Miss Piggy in "Brian Does Hollywood".

A slang term for licking toad in "Let's Go to the Hop" is "Doing Kermit".

In "A Fish out of Water", it is revealed that Jim Kaplan, at the time running Jim's Tattoo Parlor, can only offer a Kermit tattoo, as it's the only tattoo he knows how to draw.

In "Deep Throats", he disguised himself as "Deep Throat" to talk to Brian Griffin about Mayor Adam West's corruption. However, Brian recognizes him so he freaks out and runs away.

In "Stewie Loves Lois", a cutaway gag shows an African-American man lost in Kermit's swamp and asks him if he knows how to get to town. Kermit tells him it's back the way he came and pulls out a rifle, about to fire.

In "Mother Tucker", he is a co-host of the show RoundTable, with Al Michaels, Harold Ramis, and Ray Romano.

Kermit portrays himself in live-action in a screen test for the movie Philadelphia in Family Guy Presents: Seth & Alex's Almost Live Comedy Show.

He is used as an example of a Muppet who hasn't sounded the same since Henson's death in "The Tan Aquatic with Steve Zissou".

After being battered at the hands of Miss Piggy, Kermit tells Fozzie Bear that they are changing the name of a skit from "Bears in Space" to "Pigs in Space" in "And I'm Joyce Kinney".

Miss Piggy and Kermit have an offspring, Kermie Jr., that doesn't fare well in "In Harmony's Way".

In "Chap Stewie", Stewie takes Kermit's place in the bicycle riding scene in The Muppet Movie.

In most of his animated appearances, Seth MacFarlane voiced him, but in "Deep Throats" he was voiced by Frank Welker who had previously voiced the character in Muppet Babies. In "The Tan Aquatic with Steve Zissou", he was voiced by John Viener.

To celebrate his return to the show, Peter gives Chris a t-shirt with Kermit on it in "Inside Family Guy".

When a disabled student named 'Kermit Legs' Kyle is named King of the James Woods Regional High School prom in "No Giggity, No Doubt", another student with a Kermit head is disappointed after thinking he was close to winning.

In "You Can't Handle the Booth!", Peter identifies the piano melody playing as an homage to a classic song from The Muppet Show, sung by Kermit's nephew, Robin.

Retrieved from "https://familyguy.fandom.com/wiki/Kermit_the_Frog?oldid=223456"
Community content is available under CC-BY-SA unless otherwise noted.