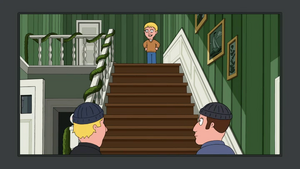 Kevin McCallister, played by Macaulay Culkin, is an eight-year-old boy who is mistakenly separated from his family and forced to outwit a pair of crooks during the holidays in the films Home Alone and in its sequel, Home Alone 2: Lost in New York.

In "Christmas Guy", the Griffins watch Home Alone With Competent Robbers in which the crooks are not fooled by the traps Kevin has set. When Kevin appears to brag of what else is in store for them, they simply shoot him so not to leave any witnesses.

Retrieved from "https://familyguy.fandom.com/wiki/Kevin_McCallister?oldid=174545"
Community content is available under CC-BY-SA unless otherwise noted.