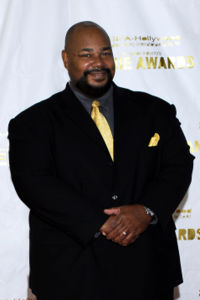 Kevin Michael Richardson (born October 25, 1964) is an American actor and voice artist, who stars in The Cleveland Show and voices Principal Lewis in American Dad!.

He is best known for his deep voice and portraying villains. His credits include Captain Gantu from Lilo & Stitch, Goro in Mortal Kombat, Openly Gator from Queer Duck, Barney Rubble from modern-day animated series and movies based upon The Flintstones and Shredder in the Nickelodeon version of Teenage Mutant Ninja Turtles.

On Family Guy, he has voiced Bill Cosby, Doug the Pimple, Ray Charles, Jerome, and African-American Jesus in "Jerome Is the New Black". Richardson voiced Chris Griffin and his friends during an experimentation with mushrooms in "You May Now Kiss the...Uh...Guy Who Receives".