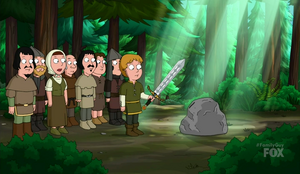 King Arthur is a legendary British leader who, according to medieval histories and romances, led the defense of Britain against Saxon invaders in the late 5th and early 6th centuries. Arthur's legendary tales are considered fiction, although there is some debate on the actual existence of the man himself.[1]

In "The Finer Strings", Lois notes that Brian helping out her father for her after his cataract surgery would make him a hero, just like King Arthur. In a cutaway, when young Arthur pulls the sword Excalibur from the stone, the stone emits a prolonged burst of flatulence, as it apologizes for ruining the moment.

Retrieved from "https://familyguy.fandom.com/wiki/King_Arthur?oldid=192907"
Community content is available under CC-BY-SA unless otherwise noted.