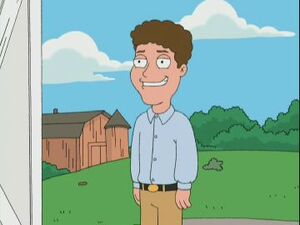 Kirk Cameron (born October 12, 1970 in Panorama City, California) is an American actor best known for his role as Mike Seaver on the television situation comedy, Growing Pains, which aired on ABC from 1985-1992, as well as several other television and film appearances as a child actor.

In "The Father, the Son, and the Holy Fonz", he pays a visit to the Church of the Fonz, in an attempt to encourage people to convert to Christianity.

In "Not All Dogs Go To Heaven", Cameron appears in an infomercial encouraging viewers to become born-again Christians. Cameron's purported influence on casting and storylines for Growing Pains after his conversion to Christianity was mirrored in that episode's plotline, whereupon Meg Griffin begins shunning Brian after learning he is an atheist. Meg had been stuck watching the looping infomercial after being stricken with the mumps.

In "8 Simple Rules for Buying My Teenage Daughter", he performs as Jean Valjean in Les Misérables. Stewie and Brian happened to see the performance, and the news made Stewie very excited. Cameron was an understudy to the lead, who had fallen ill.

After a hard day's work in "Are You There God? It's Me, Peter", God wishes a good night to a picture of Kirk Cameron.

Kirk is voiced by Chris Cox.

Retrieved from "https://familyguy.fandom.com/wiki/Kirk_Cameron?oldid=218715"
Community content is available under CC-BY-SA unless otherwise noted.