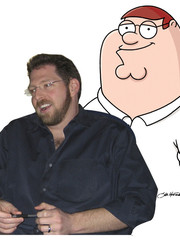 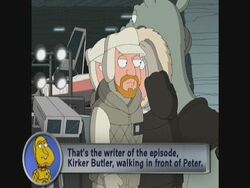 Kirker Butler is an American animation writer. Butler is most notably known for writing and producing several episodes of the animated series Family Guy, as well as serving as co-executive producer of The Cleveland Show, another series by Family Guy creator Seth MacFarlane.

Butler landed a job on the Family Guy writing staff after a spec script he had written was given to Seth MacFarlane.

Butler has also performed assorted voices for Family Guy, and appeared as a member of the Rebel Alliance on Hoth in Dark Side. He walked in front of Han Solo, who was played by Peter Griffin.

He participated in the Star Wars Trivial Pursuit game as a special feature on the It's A Trap! DVD.

Retrieved from "https://familyguy.fandom.com/wiki/Kirker_Butler?oldid=219193"
Community content is available under CC-BY-SA unless otherwise noted.