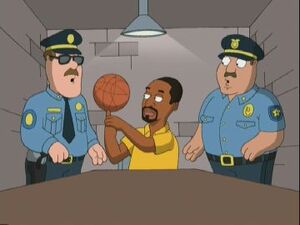 Kobe Bean Bryant (born August 23, 1978) is an American shooting guard who plays for the Los Angeles Lakers in the National Basketball Association (NBA). Bryant enjoyed a successful high school basketball career and made instant headlines when he decided to go directly into the NBA upon graduation. He was selected with the 13th overall pick in the 1996 NBA Draft by the Charlotte Hornets, then traded to the Los Angeles Lakers. Bryant and then-teammate Shaquille O'Neal led the Lakers to three consecutive NBA championships from 2000 to 2002. After losing in the 2008 NBA Finals, Bryant led the Lakers to two consecutive championships in 2009 and 2010 and was named NBA Finals MVP on both occasions.

Retrieved from "https://familyguy.fandom.com/wiki/Kobe_Bryant?oldid=124224"
Community content is available under CC-BY-SA unless otherwise noted.