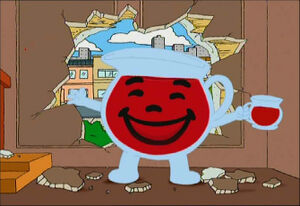 The Kool-Aid Man is the mascot for Kool-Aid, a brand of flavored drink mix. The character has appeared on television and print advertising as a fun-loving character, appearing to children and sharing his Kool-Aid beverage, as well as his catchphrase "Oh yeah!". He is a gigantic anthropomorphic pitcher, filled with Tropical Punch Kool-Aid and marked with a fingerpainted smiley face. He is voiced by Seth MacFarlane.

In "Death Has a Shadow", Peter Griffin has landed in court for welfare fraud. His family pleaded for his innocence, but it was initially to no avail. The judge sentenced Peter to two years in prison. After each family member screams "Oh no!", the Kool-Aid Man runs through the courtroom wall screaming "OH YEAH!", then backs away awkwardly.

He also appeared at the Red Carpet premiere for Stewie Griffin: The Untold Story and at the afterparty. He stops to pose for a photo with Drew Barrymore.

In "Peterotica", he is shown sitting in his living room when a car crashes through his wall, causing him to realize how it felt to be the target. Later, in the episode, after Peter fell off a train and rolled into the same wall again, the Kool-Aid Man moans in disbelief.

In "Prick Up Your Ears", after Stewie Griffin panics about the existence of the Tooth Fairy, Brian Griffin and Chris Griffin fail to calm Stewie down and then Glenn Quagmire makes an attempt. Then the Kool-Aid Man is seen in a pair of boxing gloves at the back of the line behind Cleveland Brown, Mayor Adam West, Herbert, The Evil Monkey, and Dr. Hartman, all of whom are armed with weapons ready to "console" Stewie one-by-one.

In "Stewie Kills Lois", once Peter is found guilty for murder in the first degree, some people shout "Oh no!" and Kool-Aid Man once again bursts through the wall screaming "OH YEAH!". The judge then complains, considering it has happened twice prior.

In "The Hand That Rocks the Wheelchair", Evil Stewie lures him out by pretending to impersonate other people going "Oh No!". When he bursts through the wall, Evil Stewie shatters him. He proceeds to lap up the spilled Kool-Aid from the floor.

When Brian and Stewie travel back in time to the events of "Death Has a Shadow" in "Back to the Pilot", they find the Kool-Aid Man waiting by the wall during Peter's welfare fraud trial for the Griffins to scream "Oh, no!" However, while Stewie is asking the Kool-Aid Man about the kool-aid inside of him, he gets distracted and thus bursts into the courtroom through the wall several moments late. While the Kool-Aid Man is then backing back out through the hole in the wall, he trips and smashes. The piece of his face then yells at Stewie and Brian for distracting him and messing things up. Brian and Stewie would later prevent their interruptions in the past by intercepting themselves and forcing them to return to the present.

Kool-Aid Man reappears in "Valentine's Day in Quahog", spending the day with his parents. When the parents meet his new girlfriend, a bottle of Yoohoo chocolate drink, his father says "Oh no!".

He ends up in the wrong Springfield in "The Simpsons Guy" when the Pawtucket Brewery is sued by Duff for copyright infringement.

He is seen at an episode wrap party in "Inside Family Guy" and swaps bodies with Bruce in "Switch the Flip".

Peter has a hallucination of the Kool-Aid Man in "Coma Guy".

Meg has a flashback of the Kool-Aid Man from "Death Has a Shadow" in "Better Off Meg".

Retrieved from "https://familyguy.fandom.com/wiki/Kool-Aid_Man?oldid=222589"
Community content is available under CC-BY-SA unless otherwise noted.