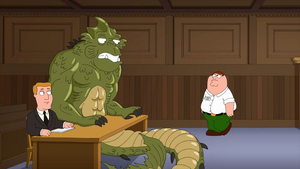 The Kraken is an immense legendary sea monster, often depicted as large cephalopods such as squid or octopus-like creatures. However, some early descriptions featured a more crab-like appearance.

When Liam Neeson sends Peter in his place to serve jury duty in "Fighting Irish", he manages to get excused from the jury pool by noting that he had previously released a Kraken. As he passes the Kraken, he is thanked for his previous aid.

Retrieved from "https://familyguy.fandom.com/wiki/Kraken?oldid=177957"
Community content is available under CC-BY-SA unless otherwise noted.