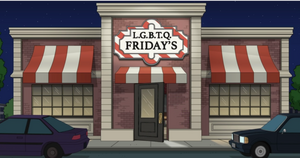 L.G.T.B.Q. Friday's is a bar/restaurant where Peter goes after being dumped by his friends in "Trans-Fat" after he becomes the unwilling recipient of gender reassignment surgery. There, he runs into Ida who both congratulates him and berates him for the stunt that resulted in his predicament, not having to live with the soul-wrenching feelings that accompany being trapped between two genders. Peter sadly agrees, but Ida offers to help him out by starting a fundraiser to allow him to get his penis back.

As they depart, Meg enters in a blood-stained wedding dress from a night of killing.

Retrieved from "https://familyguy.fandom.com/wiki/L.G.B.T.Q._Friday%27s?oldid=217368"
Community content is available under CC-BY-SA unless otherwise noted.