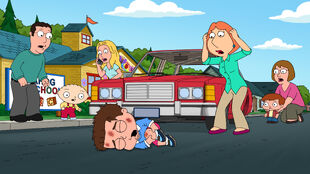 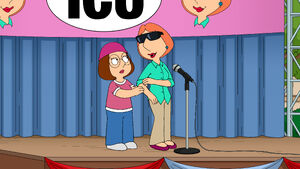 While dropping Stewie off at preschool, Lois accidentally strikes his playmate, Doug. She discovers she needs LASIK surgery, but after the procedure she finds she's totally blind. In order to bring her out of her funk, Meg convinces her to make a video talking about her feelings. The video becomes a success and Lois spins it into marketing under the name ICU, despite Meg insisting that she's taking it beyond its original purpose. But when Lois wakes up one morning and discovers she can see again, she tries to keep it hidden so that she won't have her marketing destroyed. However, Meg become suspicious when she's able to walk down a set of stairs unaided. Before she can talk to her about this, Lois is offered the chance to go on a big talk show. Meg's suspicions are confirmed when Lois can clearly see the colors of a dress that she's trying to choose between. On stage, Lois gives the game away when she can clearly see Reese Witherspoon holding a big check for her charity. As punishment, she is forced to appear on a daytime courtroom drama hosted by Cleveland Brown. 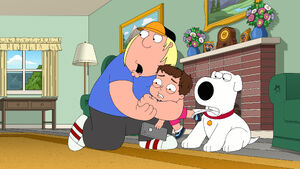 Meanwhile, when Doug's own parents are too busy to attend to him, the family volunteers to build him a treehouse in order to stave off a lawsuit. They soon find themselves roped into other activities where Doug actually benefits from their help. But when the side activities keep piling up, they call his bluff on notifying his father, and Stewie attempts to call him himself. However, they discover that Doug is holding his father's phone and has been continuing to add to their activities in order to spend more time with them. When Doug's own father arrives and gives him the brush-off just so he can spend time with his mistress, Chris and Brian both offer to poop in his shoes in retaliation, while Doug and Stewie agree to keep their hostilities toward each other away from their private lives.