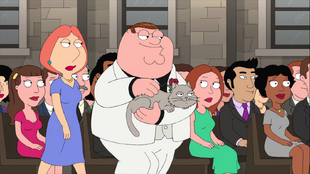 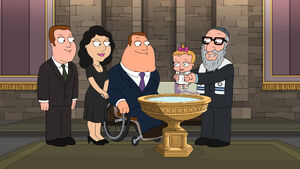 When Joe invites Peter to become Susie's Godfather at her christening, he lets the role go to his head. But when he makes a scene at a restaurant, he becomes mistaken for an actual mobster. As part of his facade, he sends Chris off to Italy where he becomes married as well as promoting his friends to his 'gang'. They get involved in various rackets, but Joe becomes uneasy that they may run afoul of the real Mafia. Indeed, Peter begins to receive hints that he's in trouble. Seeing an opportunity, Joe convinces him to wear a wire in order to take down the mob. Meanwhile, he warns Chris whose, new wife is killed by a car bomb. 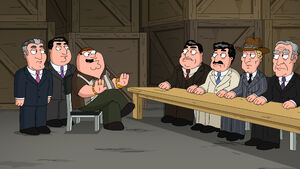 Peter naturally screws up and they find out he's wearing a wire. Joe and the police burst in to save him, but allows himself to also get captured. Just as they're nearly killed, they are saved when a jar of Prego spaghetti sauce, that Peter had dissed earlier for being store bought, guns down their captor.

Things return to almost normal, but Brian, who had endured a series of Godfather-inspired deaths after running afoul of various family members, admits he drank the last of Lois' wine. She takes him for a walk in the woods where she tells him she doesn't watch mafia movies, but admits to watching Fargo as she tosses him in a wood chipper.