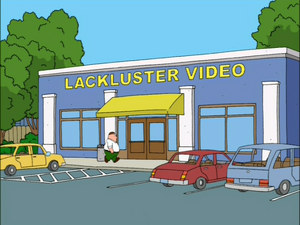 Lackluster Video is a local video store franchise in Quahog. The name is a parody of Blockbuster Video.

Peter Griffin and Tom Tucker tried to rent pornographic movies from the store. Griffin's rant here led Tucker to offer him his own segment on Quahog 5 News. It was seen in Stewie Griffin: The Untold Story segment "Stewie B. Goode".

The store was formerly known as Sal's Video before it was taken over. According to the shopkeeper, Lackluster Video has 50,000 stores nationwide. The franchise censors anything in the films sold that isn't extremely Christian in taste.

Retrieved from "https://familyguy.fandom.com/wiki/Lackluster_Video?oldid=201513"
Community content is available under CC-BY-SA unless otherwise noted.