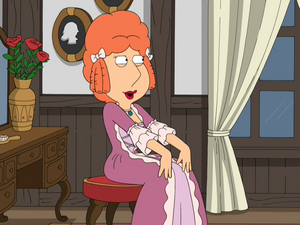 Lady Redbush was the fiancée of Griffin Peterson, Peter Griffin's previous life that appeared in "Peter's Progress". She is daughter to Carter Redbush. She was to be married to Griffin Peterson but King Stewart III wanted her all to himself. At her wedding, the king tells her that Griffin had died prior. She instead married King Stewart for about a year until she finds out that Griffin is alive. After escaping to Quahog and is won back by Griffin in a faceoff with the King, she presumably marries Griffin.

While resembling Lois Griffin, Lois may not be a descendant of Redbush and Peterson.

Retrieved from "https://familyguy.fandom.com/wiki/Lady_Redbush?oldid=200044"
Community content is available under CC-BY-SA unless otherwise noted.