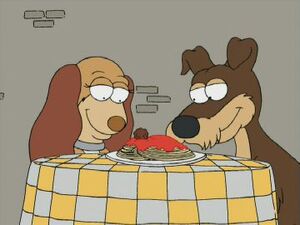 Lady and the Tramp was parodied in "Brian: Portrait of a Dog", "I Take Thee Quagmire", where Glenn and Joan Quagmire had the spaghetti dinner, and "Stew-Roids". In the latter, Michael Vick was their co-star, interrupting their spaghetti dinner and drowning them.

Joe & Troy use 'Lady and the Tramp' as a euphemism for eating closely together in "The Movement".

Retrieved from "https://familyguy.fandom.com/wiki/Lady_and_the_Tramp?oldid=220271"
Community content is available under CC-BY-SA unless otherwise noted.