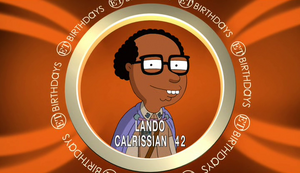 In Blue Harvest, Calrissian was made the chief administrator of the Bespin mining facility, according to Rush Limbaugh.

Retrieved from "https://familyguy.fandom.com/wiki/Lando_Calrissian?oldid=206944"
Community content is available under CC-BY-SA unless otherwise noted.