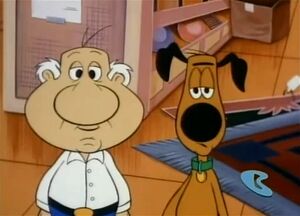 The Larry shorts were two animated films made by Seth MacFarlane in the 1990s, which led to the development of Family Guy as a prime-time TV show from 1999 onwards. One of them aired on Cartoon Network's What-a-Cartoon! show.

Life of Larry was made by Seth as his capstone project at the Rhode Island School of Design. It served as a pilot for an animated series starring an aging balding man named Larry, his talking dog Steve, his wife Lois, and his son Milt. In between the animated segments, Seth does some live action wraparounds introducing some scenes and cutaways. Many of the gags from this short later appeared in early episodes of Family Guy, including:

In addition, Seth's first line in the short was "Oh, hi there. You scared the crap out of me." He repeated this line in one of his live-action promos for Family Guy on [adult swim]. [1]

Larry & Steve was created for Cartoon Network's "What-a-Cartoon!" show. Larry & Steve deviated slightly from Life of Larry as the only characters from the former were Larry and Steve. Additionally, while Life of Larry focused around Larry, this cartoon centered on Steve. Also, while most characters acknowledged Steve as a talking dog, in this cartoon, only Larry could hear Steve talk. At one point, Larry mentions visiting a store called "Stewey's", and there is an airplane pilot character who shares some similar looks and a similar voice to Quagmire.

Retrieved from "https://familyguy.fandom.com/wiki/Larry_shorts?oldid=181637"
Community content is available under CC-BY-SA unless otherwise noted.