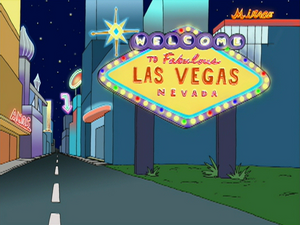 Las Vegas is the most populous city in the U.S. state of Nevada and the county seat of Clark County. Las Vegas is an internationally renowned major resort city known primarily for gambling, shopping, and fine dining and is the leading financial and cultural center for Southern Nevada.

In "When You Wish Upon a Weinstein", Peter takes Chris to Las Vegas to get a Bar Mitzvah, believing it will make him smarter.

Peter lands on the Eiffel Tower at the Paris Las Vegas resort while skydiving in "Turban Cowboy", becoming impaled on its spire while being insulted by those below.

After Stewie's new teleportation device malfunctions, he believes it failed to work. But instead, it created a duplicate set of Brian and Stewie. While the prime pair fly to Las Vegas, both sets each see a road trip differently in "Roads to Vegas".

An extended cutaway gag in "Peter, Chris, & Brian" features Peter losing at Pai Gow poker in Las Vegas, then being forced to endure a final day penniless and a miserable flight home.

Cleveland sings in front of the Las Vegas sign during "Come On Home" when Peter and the guys try to convince Quagmire not to stay in Korea in "Candy Quahog Marshmallow!".

Hijackers attempt to force Quagmire to crash his plane into a large hotel in Las Vegas in "Passenger Fatty-Seven".

Peter and Meg's drinking binge takes them to Las Vegas in "Crimes and Meg's Demeanor", but when Peter finds his bank account is depleted, they quickly leave.

Stewie's Sherlock Holmes takes Brian's Dr. Watson to Las Vegas of 1896 in "V is for Mystery", although all they find is desert and note that the strippers won't arrive until 1952.

Retrieved from "https://familyguy.fandom.com/wiki/Las_Vegas?oldid=203313"
Community content is available under CC-BY-SA unless otherwise noted.