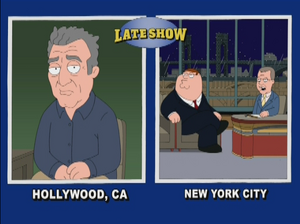 Late Show with David Letterman is a U.S. late-night talk show hosted by David Letterman on CBS. The show debuted on August 30, 1993, and is produced by Letterman's production company, Worldwide Pants Incorporated. The show's music director and band-leader of the house band, the CBS Orchestra, is Paul Shaffer. The head writers are brothers Justin Stangel and Eric Stangel. The announcer is Alan Kalter, who replaced Bill Wendell in 1995. Mark Hentemann was once a writer for the show.

When Peter Griffin reminisces about "the good old days" when Brian was his sidekick in "The Thin White Line", Peter becomes Letterman and Brian becomes Shaffer.

In one episode of the show, Letterman had James Woods, whose identity Peter Griffin assumed, as a guest in Back to the Woods. "Woods" was promoting his new HBO TV film called September 11, 2000-and-fun, co-starring David Spade. He was voiced by his most well-known impressionist, Dave Van Dam.

In Stewie Griffin: The Untold Story, Stewie Griffin mentions being on talk shows in between films, including the Late Show, Inside the Actors Studio, and The View.

In It's A Trap!, number four on a certain Top Ten List was "Joey Buttafuoco's Pants", as revealed by Jabba the Hutt, who was played by Joe Swanson.

David appears in "Ratings Guy" reading Good Night, Truck to Peter. When Paul comes on to play, Peter quickly shuts off the television noting he thinks Paul is terrible.

Retrieved from "https://familyguy.fandom.com/wiki/Late_Show_with_David_Letterman?oldid=131834"
Community content is available under CC-BY-SA unless otherwise noted.