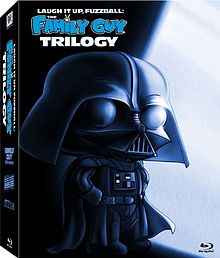 Laugh It Up Fuzzball: The Family Guy Trilogy, is a Family Guy DVD box set that includes the three animated Star Wars parody specials and is available in Blu-ray and standard format DVD.

The title of the box set comes from a line from Star Wars Episode V: The Empire Strikes Back. When Chewbacca laughs heartily at Princess Leia calling Han Solo "Laserbrain", Han reacts to him by saying, "Laugh it up, fuzzball."

Retrieved from "https://familyguy.fandom.com/wiki/Laugh_It_Up_Fuzzball:_The_Family_Guy_Trilogy?oldid=138600"
Community content is available under CC-BY-SA unless otherwise noted.