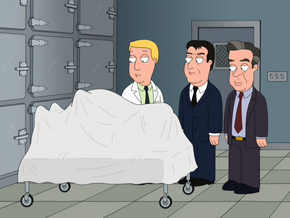 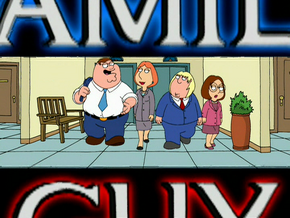 Sam Waterston, who portrayed Jack McCoy from 1994 until the show's cancellation in 2010, played Dr. Bruce Kaplan, Brian Griffin's psychologist in "Brian in Love" and "The Thin White Line".

The opening credits to "Fast Times at Buddy Cianci Jr. High" parody of those of the franchise, and were narrated by Steven Zirnkilton, opening credits narrator for all series.

In "FOX-y Lady", Peter Griffin claimed to have starred on the show as a dead body until he got an itch on his crotch. Detectives Mike Logan and Lennie Briscoe are seen.

After singing the theme song while in Las Vegas, the family is discussing inappropriate language on television. Stewie claimed he heard the utterance of the word "balls" while watching an episode of the show.

In "Ratings Guy", Peter asks Dick Wolf to make the same Law & Order six times in order to save television.

Retrieved from "https://familyguy.fandom.com/wiki/Law_%26_Order?oldid=218395"
Community content is available under CC-BY-SA unless otherwise noted.