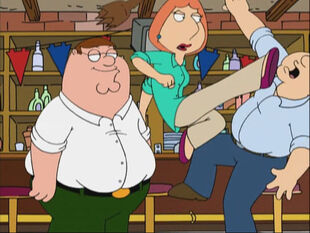 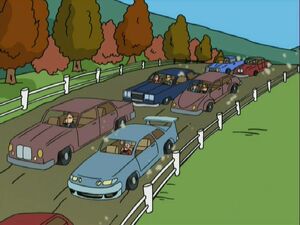 The quiet of Quahog is disrupted when the leaves start turning fall colors and "leafers" from New York City invade town. Bonnie invites Lois to a Tae Jitsu class where she quickly advances to black belt. Peter almost gets into a fight with a New Yorker, but Lois beats him up instead to keep him out of trouble. Lois and Brian think Peter is embarrassed, but the latter decides to exploit Lois’ fighting abilities to drive the leafers back to New York. Peter takes advantage of this, but Lois begins to get out of control. She even attacks her karate sensei and refuses to take "no" for an answer when it comes to sex with Peter. 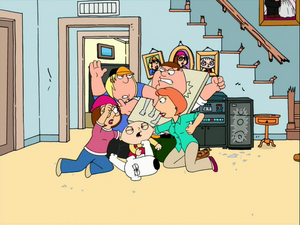 Stewie walks in on Peter eating his graham crackers and gets very angry. Peter tells Brian what Lois did, but when Stewie strikes Peter with a baseball bat, Lois resolves to rid the house of anger. She takes Stewie to the Quahog Child Psychology Center, but he attacks Dr. Morin, the psychiatrist. Soon, Lois gets into an argument with Peter, but Brian gives them supposed mood elevating drugs to settle things but it ends up that he lied and gave them placebos. Peter and Lois argue again and start to fight. Peter manages to be evenly matched with Lois, and as Chris cheers him on, Meg gets angry with Chris, blaming their father for starting the fight. Chris counters by reminding her that Lois went out of control. Meg pokes Chris in anger, and he attacks her, saying he doesn't like to be touched. Stewie and Brian then begin to fight for no reason as the family ends up in an all-out brawl. They fight viciously, destroying everything in the house, but they begin to laugh when Peter ends up being the rear-end of a horse painting that is smashed over his head and they realize how ridiculous this all is. The laughter is cut short when Stewie resumes the fight by hitting Lois with a chair. Finally exhausted, they blame the violence on TV. Peter then blames the network against Lois' advice, and the show's animation budget is cut short as a cutout of Peter is stiffly moved off screen.