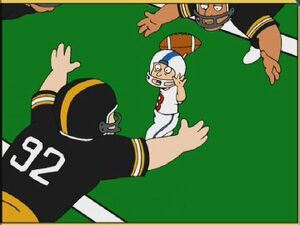 Johnny Gobraun is a terminally ill boy who appears in "If I'm Dyin', I'm Lyin'". He gets his wish granted by the Grant-A-Dream Foundation to play quarterback in an actual game for the New England Patriots. Their opponent that week was the Pittsburgh Steelers. Gobraun was sacked at least once during the game. Dirk Bandit the announcer remarks that he should have wished for some blocking.

Retrieved from "https://familyguy.fandom.com/wiki/Little_Johnny_Gobraun?oldid=95388"
Community content is available under CC-BY-SA unless otherwise noted.