Livin' on a Prayer

For the song see: Livin' on a Prayer (song) 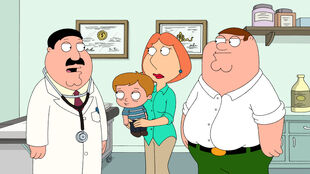 Livin' on a Prayer
Lois contends with a family that relies on divine healing. 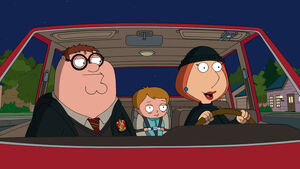 When Stewie makes a new friend Scotty Jennings the Griffins invite him over for a play date. But when he collapses, they rush him to the hospital where they discover he has cancer. When his parents Ben & Hope arrive, Lois finds out that they refuse regular medical care and rely on the power of faith for healing. Lois is aghast at their refusal to get competent help. When she tries to confront them about getting professional help, they still refuse. When even Joe is unable to help, Lois decides to take matters into her own hands and kidnaps Scotty.

While a manhunt ensues, Lois and Peter arrive at the hospital and run into Joe and his officers. When Ben and Hope arrive, Lois is able to talk them into getting Scotty help by telling them that all of the medical advances are part of God's Will. When the family tells Stewie his playmate will get better, Stewie befriends a new child with leprosy.

Previous Episode /// Livin' on a Prayer \\\ Next Episode