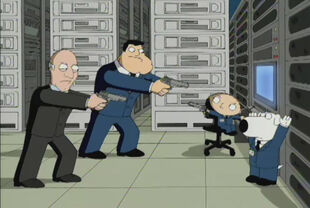 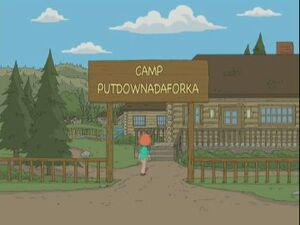 Part 2 picks up directly where Part 1 left off, with Lois announcing that Stewie tried to kill her. Everyone is confused at the idea, but Lois insists it is true and begins to explain what happened to her. After being shot by Stewie and falling overboard, she was rescued by a merman and nursed back to life. She found herself suffering from amnesia and aimlessly wandered the country, eventually ending up at a fat camp in North Carolina called Camp Putdownadaforka, where she was hired as a counselor, to prevent the kids eating each other. A few months later, Lois met and hooked up with a young man who initially seemed very nice, though it turned out he was actually a white supremacist. He took her to a convention where, after she spoke out against them, Lois was hit in the head by a bottle thrown by an enraged attendee. The impact of the bottle caused her to regain her memory, and she rushed back to Quahog. As soon as she finishes her story, everyone notices that Stewie has escaped. Joe initiates a manhunt around town to track down Stewie, though his team has little luck.

The Griffins return home and are surprised to find Stewie waiting for them, armed with a M1911A1. Knowing that his crime and maliciousness are no longer a secret to the Griffins, he restrains them while he forms a plan. When Cleveland walks into the house in a casual manner, he is shot and killed by Stewie in front of the terrified family. Realizing that neither the police nor the press would ever overlook a black man's disappearance, Stewie ties the family down to chairs in the living room and forces Brian to drive him to the CIA Headquarters.

After Stewie and Brian pose as CIA agents to get into the building, Stewie gains access to the CIA's supercomputer and takes control of the planet's power grid. Stan Smith and Avery Bullock attempt to intervene, but find themselves helpless against Stewie's threat to rid the world of electricity, and fulfill his demands to become "President of the World." When President Stewie broadcasts his oppressive new laws across the planet from the White House, Lois becomes enraged and fed up with his tyrannical reign. Realizing what she must do, she arms herself with various weapons from Stewie's reserve and heads out to assassinate her baby. 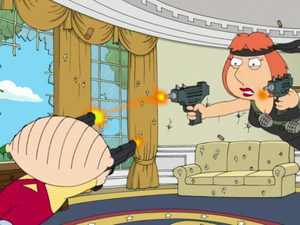 Lois crashes through the window in the Oval Office at the White House and confronts Stewie. Lois and Stewie are each armed with an arsenal of weapons and they clash in a violent, drawn-out battle. Lois eventually gains the upper hand and prepares to shoot Stewie with her shotgun. After being spurred on by Stewie, however, Lois ultimately realizes that although he is evil, he is still her baby and she could never bring herself to kill him; Lois drops her gun and surrenders, allowing Stewie, who has no qualms about killing his mother, to gain the upper hand. Just as he is about to kill Lois, Peter enters the room and shoots Stewie in the chest then the head, killing him. Peter and Lois loom over Stewie's corpse and, despite everything that's happened, hold each other brokenheartedly in silence over the loss of their son. The words "SIMULATION OVER" suddenly pop up on the screen.

The scene pulls away to Stewie sitting in a strange chair-like device. Brian comes into the room with postcards from Peter and Lois on the cruise, which is reportedly going well for them, and finds Stewie coming out of the device. It is revealed that most of the events from the past two episodes were in fact a computer simulation Stewie was watching to see how attempting to kill Lois would pan out for him after being told by Brian that he never would. In other words, the entire affair was largely a "dream." Stewie tells Brian things didn't work out so well for him in the simulation, and that his plans of matricide and world domination will have to wait. They go off on a tangent about how the "dream sequence" may annoy people potentially watching it, saying it would be like a "big middle finger to the fans". As Stewie insists that at least it didn't cut off in mid-sentence like The Sopranos, he is cut off in mid-sentence when the screen becomes black.