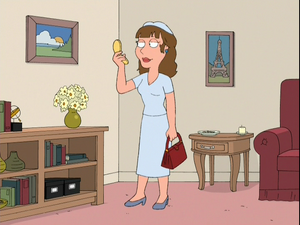 Lois Joanne Lane-Kent is a fictional character, the primary love interest of Superman in the comic books of DC Comics. Created by writer Jerry Siegel and artist Joe Shuster, she first appeared in Action Comics #1 (June 1938). Lois is Superman's chief romantic interest and, in the previous DC continuity, his wife, until DC rebooted the series in 2011. Like Superman's alter ego Clark Kent, she is a reporter for the Metropolis newspaper, The Daily Planet.

She appears in "Padre de Familia" in the film Superman V: The Broken Condom where she's about to go out on a date with Superman, but after he discovers she's pregnant, he ends the relationship with her.

In "Ratings Guy", when he finds he doesn't have enough pull to affect national shows, Peter bemoans the fact that he'll never see an episode of Superman where Clark Kent and Lois Lane get together.

In "The Most Interesting Man in the World", Lois and other girls cry after discovering they have breast cancer resulting from Superman's x-ray vision.

Retrieved from "https://familyguy.fandom.com/wiki/Lois_Lane?oldid=194666"
Community content is available under CC-BY-SA unless otherwise noted.