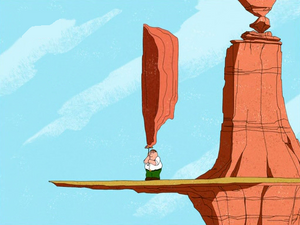 In "I Never Met the Dead Man", Wile E. Coyote is seen riding in a car with Peter, and runs over the Road Runner. When Peter realizes it, Wile E. tells him to keep going.

In "PTV", Coyote appears in a cutaway when Peter claims he worked for ACME. He offers a store credit when Wile E. claims a refund for a giant sling shot that slammed him into a mountain. Mrs. Coyote then appears telling her husband to hurry up.

Foghorn Leghorn visits a KFC in "Back to the Woods". He greets Colonel Sanders complimenting the smells of the spices. Sanders then decapitates him with a meat cleaver. Leghorn watches his headless body run around with guidance, not realizing his head was cut off until mid-sentence.

Bugs Bunny and Elmer Fudd have a showdown in Stewie Griffin: The Untold Story. Bugs is shot in the chest by Fudd, followed by Fudd snapping his neck, instantly killing him and ending their rivalry.

Rapid Dave is the American equivalent of Speedy Gonzales. He was created by Peter in "Padre de Familia" as a way of cleansing children's entertainment of foreign characters. Sylvester the Cat is seen chasing Dave before he escapes.

Yosemite Sam is fitted for extremely tight pants in "Tales of a Third Grade Nothing".

"Partial Terms of Endearment" features an extended parody as Peter tries to force his wife Lois to have an abortion.

In "Foreign Affairs", François references Pepé Le Pew chasing Penelope Pussycat, saying he would do the same to Bonnie.

Peter and Mahmoud watch a Muslim version of Looney Tunes in "Turban Cowboy" where Porky Pig makes his traditional appearance though the drum head, although noting that under Islamic Law he is forbidden as dirty.

Peter pauses to see if a tornado could be Taz, the Tasmanian Devil in "Farmer Guy".

When Lois demands sex from someone when Peter is unable to perform in "Peter Problems", Peter cautions her that Quagmire will show up just like the Road Runner. Quagmire proceeds to do just that, including carrying a sign stating "Giggity Giggity". Peter reassures Lois that she has nothing to really fear, as her vagina is really just a painted on hole.

When Peter promises Lois to be gentile in his attempt to help Jesus lose his virginity in "The 2000-Year-Old Virgin", he claims he will be as gentile was the Tasmanian Devil tucking in his kids. A cutaway shows Taz reading a bedtime story. After he finishes, he kisses his child goodnight and starts to wind up his routine tornado exit, only to pause and gently slip from the room.

To get attention during the drama segment of "Emmy-Winning Episode", Meg bounces around in imitation of Daffy Duck.

Brian sings "Hello! Ma Baby" in a parody of the Looney Tunes cartoon "One Froggy Evening" in "Dead Dog Walking".

"Family Guy Lite" makes a reference to the Looney Tunes short, "Rabbit Seasoning". When Brian gets kicked by his horse a fourth time, his nose is sent spinning, similar to how Daffy Duck's beak turns when Elmer Fudd shoots him. Brian then moves his nose back to normal and uses the catchphrase, "You're despicable!"

Meg visits several shopping malls with pun names in "Christmas is Coming" in search of a Santa Claus that gave her her first orgasm, including "That's Mall Folks," based on the Looney Tunes closing catch phrase.

When Peter and Lois get into a fight over her haircut in "Short Cuts", the former threatens to wear an shirt embroidered with the Looney Tunes characters to church.

Retrieved from "https://familyguy.fandom.com/wiki/Looney_Tunes?oldid=224977"
Community content is available under CC-BY-SA unless otherwise noted.