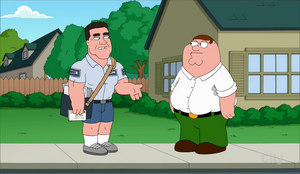 In "Play It Again, Brian", Peter tells Brian that he can't hold on to a girlfriend, comparing Jillian to Lou Ferrigno.

When Stewie bulks up on steroids in "Stew-Roids", Brian remarks that he looks like Lou Ferrigno's poop.

While Peter is ecstatic when Rob Gronkowski moves to the neighborhood in "Gronkowsbees", Lou arrives to deliver the mail. As he points out his role in The Incredible Hulk, Peter notes that on any other occasion he would be thrilled, but only wants his mail at this time.

Retrieved from "https://familyguy.fandom.com/wiki/Lou_Ferrigno?oldid=209224"
Community content is available under CC-BY-SA unless otherwise noted.