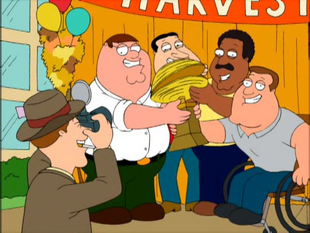 The guys with the trophy.

Love Thy Trophy
The neighborhood wins a float contest but trouble arises from whom has possession of the trophy. 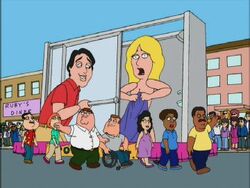 For Quahog's yearly harvest festival parade with floats the theme is decided by Peter, who chooses "That Episode of Who's the Boss? in Which Tony Sees Angela Naked". The float built by Spooner Street wins, but the men can't agree at whose house the golden clam trophy should reside. They eventually decide on having it be placed over the road, held up by the statues from the float. The next day, the trophy is found to be missing, and everyone immediately suspects each other of stealing it, causing everyone to take precautionary measures including rigging their homes with traps and acquiring weapons.

Meanwhile, Meg gets a job at Flappy Jack's House of Pancakes so she can buy herself a Prada bag after being insulted by the girls at school for her inferior purse. She lets restaurateur Flappy believe that Stewie is her crack-addicted baby and she is a single mother, so that people will give her bigger tips, which leads to one of the customers asking for her address feeling sorry for Stewie. 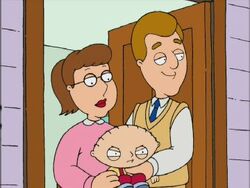 When asked about the Griffins by a woman from Child Protective Services, Joe, Cleveland and Quagmire unaware of who she is tell her that the Griffins are nasty people and can't be trusted. This eventually leads her to place Stewie in a foster home. Upon finding this out, Peter and Lois, are angry at their friends for what they said to Child Protective Services after the two failed to straighten the matter out with them at their office. Once Brian points out that all of them are at fault for the entire conflict over the trophy, the Griffins along with Quagmire, Cleveland, Loretta, Joe, and Bonnie put their argument aside to bail Stewie out. When an espionage mission fails, they instead trade Meg's newly-acquired Prada bag for Stewie, but when they still don't know what happened to the trophy, Brian insinuates that all mysteries should be left unsolved. That night, it is revealed to the viewers that Brian buried it in the Griffins' yard due to Brian's urge to bury shiny things.

Retrieved from "https://familyguy.fandom.com/wiki/Love_Thy_Trophy?oldid=216434"
Community content is available under CC-BY-SA unless otherwise noted.