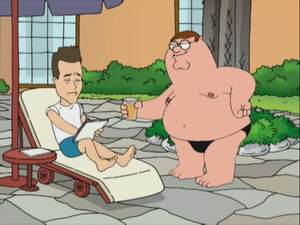 He voiced himself in "The Story on Page One". Meg Griffin is one of his biggest fans and is the founder of the Luke Perry Fan Club's Quahog Chapter. Her father Peter published a story under Meg's name in her school newspaper the James Woods Bugle alleging that Perry is gay. He is later revealed to be gay as the episode ends, in which he sleeps with Mayor Adam West, telling him he will stop stealing his water if he does it.

He also appeared with his 90210 castmates in Stewie Griffin: The Untold Story, in a cutaway that parodies his portrayal of McKay, who was a teenager when Perry, then in his mid-20s, began portraying him.

"No Giggity, No Doubt", which aired immediately following his death, is dedicated to Luke.

Retrieved from "https://familyguy.fandom.com/wiki/Luke_Perry?oldid=211102"
Community content is available under CC-BY-SA unless otherwise noted.