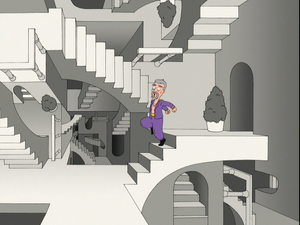 Maurits Cornelis Escher (17 June 1898 – 27 March 1972), usually referred to as M.C. Escher, was a Dutch-Frisian graphic artist. He is known for his often mathematically inspired woodcuts, lithographs, and mezzotints. These feature impossible constructions, explorations of infinity, architecture, and tessellations.

In "No Meals on Wheels", Peter Griffin says the situation with paraplegics at Big Pete's House of Munch is weirder than M.C. Escher's attempts to become a rapper. The setting of the video for "Going Up the Stairs" was based on Escher’s Relativity.

Stewie has the same picture in his and Brian's dorm room in "Brian Goes Back to College". Stewie is fond of calling it "Crazy Stairs".

Retrieved from "https://familyguy.fandom.com/wiki/M.C._Escher?oldid=197068"
Community content is available under CC-BY-SA unless otherwise noted.