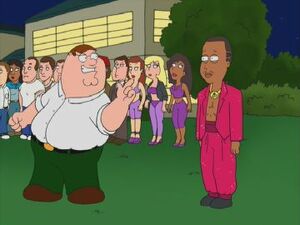 Stanley Kirk Burrell (born March 30, 1962 in Oakland, California, United States), better known by his stage name M.C. Hammer (or simply Hammer), is an American rapper, entertainer, business entrepreneur, dancer and actor. He was commercially most popular during the late 1980s until the mid-1990s. Remembered for a rapid rise to fame before losing the majority of his fortune, Hammer is also known for his hit records, including "U Can't Touch This", flamboyant dance techniques and trademark Hammer pants. Hammer's superstar-status made him a household name and pop icon.

Peter Griffin's song "Can't Touch Me" in "E. Peterbus Unum" is set to the tune of "U Can't Touch This". Burrell also appears after Peter, a Petorian, claims that Hammer could not sue him for copyright infringement.

He is also seen in "Saving Private Brian" when Peter and Lois go to the Grammy Awards to find Marilyn Manson.

During a conversation in "The Father, the Son, and the Holy Fonz", Brian believed it was Hammer who ran out of money, not Dennis Rodman.

Retrieved from "https://familyguy.fandom.com/wiki/MC_Hammer?oldid=224771"
Community content is available under CC-BY-SA unless otherwise noted.