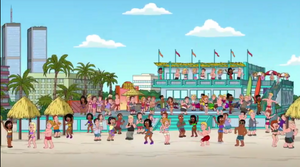 MTV Beach House is a show that featured blocks of music videos with live performances and wrap-arounds set in various beaches over the course of its original run from 1993 to the mid-2000s. Settings includes houses in New York, California, Florida and New Jersey along with a rotating set of hosts. In 1995, the show was set in South Beach, Florida along with hosts Daisy Fuentes and Antonia Sabato, Jr..[1]

In "Peter & Lois' Wedding", in a flashback set in the 1990s, Carter plots to break up Peter and Lois by sending Peter and his friends to the MTV beach house in Florida for a bachelor party. There, he bribes Daisy Fuentes to kiss Peter where it is broadcast for Lois to see. Thinking he is cheating, she calls off their the wedding.

Joe is also present to party and hit on Daria Morgendorffer, but is unaware of his future friends' presence.

Retrieved from "https://familyguy.fandom.com/wiki/MTV_Beach_House?oldid=216949"
Community content is available under CC-BY-SA unless otherwise noted.