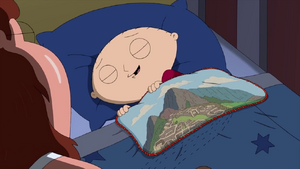 Machu Picchu is a 15th-century Inca citadel situated on a mountain ridge located in the Cusco Region, Urubamba Province, Machupicchu District in Peru. In 2007, Machu Picchu was voted one of the New Seven Wonders of the World in a worldwide Internet poll.[1]

During the Michael Bay segment of "Three Directors", Decepticon Transformers are set to destroy the New Seven Wonders of the World, including Hagia Sophia and Machu Picchu. Peter is recruited to stop them due to his skill in tossing beer kegs as their only weakness is beer. After recruiting his friends to help, he visits with his estranged wife and kids. As he sees the children, Stewie sleeps and begs him not to let harm come to Machu Picchu.

Retrieved from "https://familyguy.fandom.com/wiki/Machu_Picchu?oldid=199931"
Community content is available under CC-BY-SA unless otherwise noted.