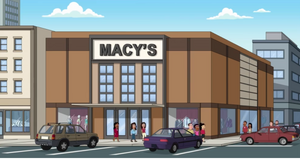 Macy's, originally R. H. Macy & Co. is an American department store chain founded in 1858 by Rowland Hussey Macy. It became a division of the Cincinnati-based Federated Department Stores in 1994 and after spreading to nearly 600 stores, as of 2015, Macy's was the largest U.S. department store company by retail sales.

Stewie sends Vinny off to go bother the cologne salesman at Macy's in "Christmas Guy".

In an effort to arouse Chris in "Hefty Shades of Gray" when he loses interest in actual physical encounters with women, Stewie and Brian take him to Macy's to look at scantily-dressed mannequins. He takes a particular interest in one without a head, as well as a bin of various parts with one that has a look of being afraid.

Retrieved from "https://familyguy.fandom.com/wiki/Macy%27s?oldid=209564"
Community content is available under CC-BY-SA unless otherwise noted.