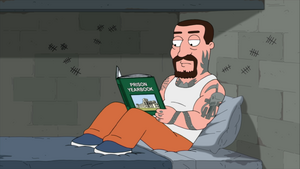 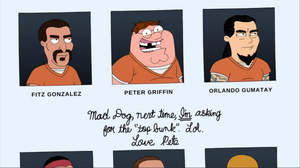 "Mad Dog" is a prisoner at the Rhode Island State Prison in "Shanksgiving".

When Peter and the guys end up in state prison instead of the city jail when trying to get away from their families for Thanksgiving, Peter allows himself to be goaded into a fight when he thinks he's called chicken. After getting beat up, he loses a front tooth and hopes that he just looks like a cute kindergartener in the prison yearbook. A cutaway gag shows where he signed the yearbook for a prisoner named "Mad Dog".

Retrieved from "https://familyguy.fandom.com/wiki/Mad_Dog?oldid=217160"
Community content is available under CC-BY-SA unless otherwise noted.