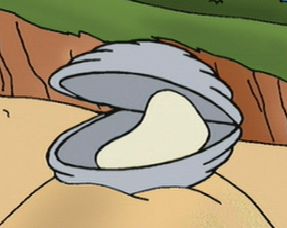 The Magic clam is a character in a legend regarding Quahog's founding. It saved Miles "Chatterbox" Musket from drowning, as told in "Fifteen Minutes of Shame". They became friends but Miles annoyed him too much. Miles was going to kill him in bed but the clam saw him. In the morning he left Miles, and was never seen again. In "Peter's Progress", Madame Claude said that the story of the Magic Clam was a myth, it seems likely that the Magic Clam is nonexistent. However, the story has endured in Quahog mythology, and there is an annual ceremony each year where the mayor of Quahog hails the return of the clam.

Retrieved from "https://familyguy.fandom.com/wiki/Magic_clam?oldid=150381"
Community content is available under CC-BY-SA unless otherwise noted.