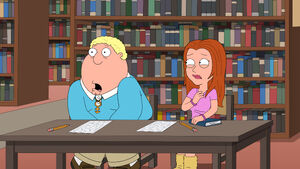 When Chris Griffin is attracted to her in "An App a Day", he takes Neil Goldman's advice to send her a picture of his penis from his cell phone. When her father finds it later, he complains to the school and Chris is labeled as a sex offender and forced to attend a rehabilitation class.

Retrieved from "https://familyguy.fandom.com/wiki/Marcy_Miller?oldid=209230"
Community content is available under CC-BY-SA unless otherwise noted.