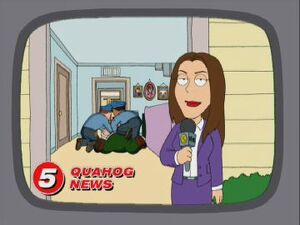 Maria Jimenez is a local Hispanic news reporter for Quahog 5 News in "One if by Clam, Two if by Sea". Tom Tucker repeatedly messes up on the pronunciation of her name, to which Diane Simmons then corrects him. Later, she reports on Peter Griffin's arrest for arson.

Jimenez is voiced by Tara Strong.

Retrieved from "https://familyguy.fandom.com/wiki/Maria_Jimenez?oldid=220632"
Community content is available under CC-BY-SA unless otherwise noted.