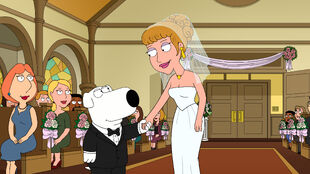 Married...With Cancer
Brian falls for a girl with cancer. 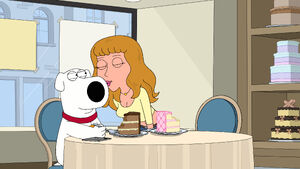 Brian gets caught by the family slipping out to the bar while hoping to score a date and they torment him over his corny old lines. He almost strikes out, but finds Jess, another woman with similar tastes and they hit it off even after she reveals that she has cancer. After they have great sex together, he agrees to help her work on her bucket list and they become closer.

Brian introduces her to the family over dinner and their humor irritates him until they leave. After going to Pizza Palace, her prognoses takes a turn for the worse and Brian asks Jess to marry him and she agrees. Quagmire puts aside their feud to throw him a bachelor party and Brian finds that as a guy seen as attractive for helping a terminally ill woman that his stock has gone up with women. Just as they complete their marriage vows, Jess' doctor arrives and reveals that her cancer is cured. Jess celebrates by eating lots of food and gaining weight now that she can finally keep it down. She also develops severe flatulence from her digestive system working again. 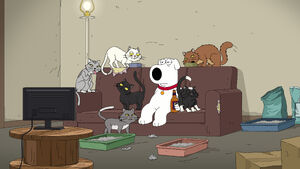 With his dreams of a short-lived commitment spiraling down the drain, Brian and Jess move back into his old apartment with her Christian mother and her cats. Jess continues to gorge herself to make up for all the food she couldn't eat before until she ends up choking and collapsing. But just as Brian thinks he's finally free of her during her funeral, she recovers which her mother proclaims as a miracle and leaves Brian in tears.

Retrieved from "https://familyguy.fandom.com/wiki/Married...With_Cancer?oldid=216306"
Community content is available under CC-BY-SA unless otherwise noted.