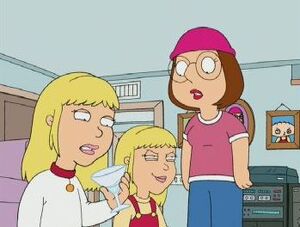 Mary-Kate Olsen and Ashley Fuller Olsen (born June 13, 1986) are American actresses, best known for playing the role of Michelle Tanner on the sitcom, Full House. Both have appeared in television and films since infancy. Since then, they have continued their celebrity through numerous television programs, films, interviews, as well as commercial endorsements.

They played Brian and Stewie Griffin in later episodes of The Real Live Griffins after the real family quits in "Fifteen Minutes of Shame". They were both voiced by Tara Strong.

Bitter about being in the Christmas Pageant, Stewie mentions going to Hollywood and wrangling himself in a three-way with the twins in "A Very Special Family Guy Freakin' Christmas".

In a parody of Heath Ledger's overdose death, Jesus is found unconscious from a drug overdose in Mary-Kate's apartment in "I Dream of Jesus".

Retrieved from "https://familyguy.fandom.com/wiki/Mary-Kate_and_Ashley_Olsen?oldid=192401"
Community content is available under CC-BY-SA unless otherwise noted.